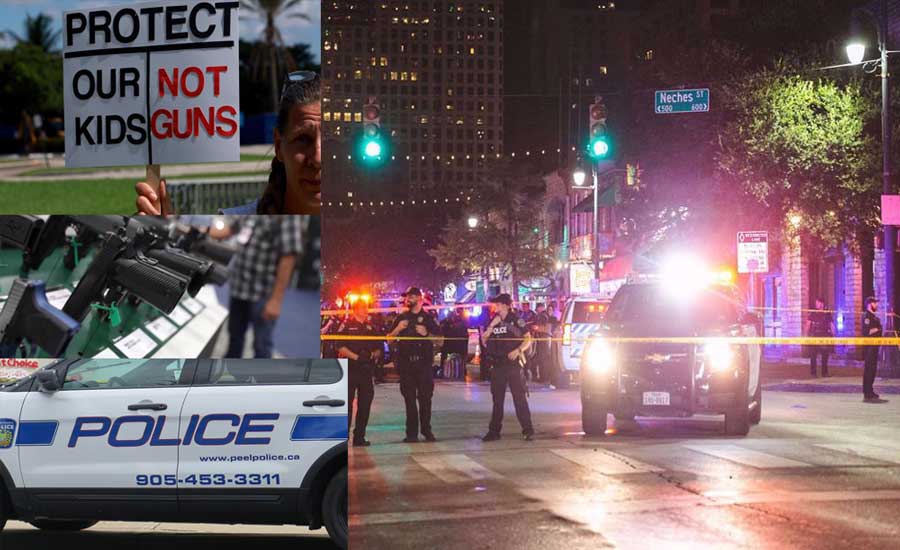 A spree of deadly mass shootings in the United States has given rise to deep apprehension among Canadians, who fear a spillover of gun violence into their country despite tougher laws.

Reports in the Western media suggest that the US gun problem is fast becoming Canada’s headache.

A story in the Guardian newspaper, pointing to numerous cases of gun violence in Canada, cites experts and gun control advocates as saying that the country’s relatively strict laws do not fully shield it from the violence of the kind that is rampant in the neighboring US.

“When you consider us next to the United States, which is so heavily armed that it’s almost unbelievable, we look pretty good,” said Ken Price, a gun control advocate whose daughter Samantha was injured in a 2018 deadly mass shooting in Toronto, is cited in the Guardian report.

“But compared to other democratic countries, there’s much more we could be doing to address gaps in the system.”

According to the 2018 Small Arms Survey, there are an estimated 34.7 firearms per 100 people in Canada, making it one of the countries with the world’s highest per-capita gun ownership rates.

A recent survey by the Angus Reid Institute found that a majority of Canadians were concerned that gun violence was increasing in their communities.

It polled about 5,000 Canadians and found that overall 43 percent believed gun violence was alarmingly increasing in the area where they live.

“While the belief in the increased volume of shootings isn’t as strong in other urban areas in the country, the proportion of respondents who believe gun violence is becoming less frequent tops out at one in 10,” the report noted.

It matches Statistics Canada data, which states that firearm-related offenses are on the rise in the country, increasing to nearly 10.9 per 100,000 people in 2020.

Trump slams Democrats for delaying measures to boost school security
Former US President Donald Trump slams the Democrats for delaying measures aimed to boost schools
Statistics Canada report also showed that after registering a fall for several years, rates of firearm-related violent crimes were soaring in Canada, the majority of which involve handguns.

Experts cited in the Guardian report said a notable number of illegal firearms police find in Canada originated in the United States.

“Increasingly, in many ways, America’s gun problem is becoming Canada’s gun problem,” Jooyoung Lee, an associate professor of sociology at the University of Toronto’s Center for the Study of the United States warned.

“Even though the US has become an international poster child of gun control laws gone awry, there’s a lot more commonality here in Canada than people might be willing to admit.”

One dead, four taken to hospital after shooting near Toronto
Police in the Peel region near Toronto said one person was killed and four were transported to hospitals in the Toronto area after a shooting.
Canada’s Justice Minister David Lametti earlier this week said imposing tougher bail conditions and longer sentences for gun violence in the country is “certainly an option”.

Lametti’s remarks came after the Canadian government gave notice that it intends to table firearms legislation in the wake of yet another mass shooting in Uvalde, Texas, US.

Trudeau referred to the school shooting in Texas as “an incredibly senseless, violent act,” adding his government is “moving forward on doing even more.”